Engineering Students Get New Drone Racing Team Off the Ground 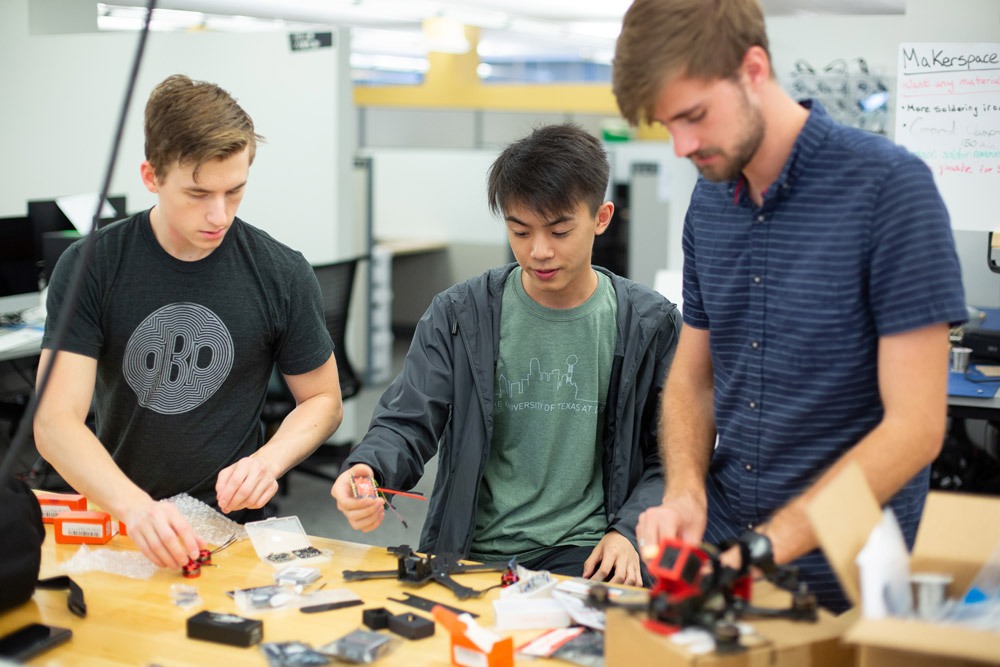 From left: Parker Speich, a computer science sophomore, joins mechanical engineering seniors Andy Huynh and Justin Pool in building a 5-inch racing quadcopter that they can use to participate in the University’s drone racing team events.

For University of Texas at Dallas mechanical engineering seniors Andy Huynh and Justin Pool, nothing beats seeing the world from a drone’s-eye view.

Since last spring, their favorite hobby has been freestyling drones, most often in a park near campus. The fraternity brothers say they enjoy the feeling of soaring above treetops when they see images transmitted from tiny cameras in their drones to the goggles they wear while piloting the tiny aerial vehicles.

“It’s the freedom of being able to go around and look at things. It feels like you have no limits,” Huynh said. 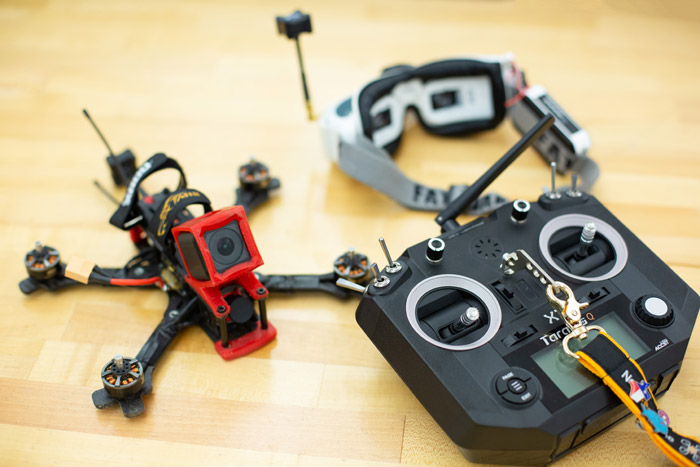 Members of the drone racing team will use a camera strapped to drones, head goggles and a transmitter to operate the drone.

Now they hope to kick their hobby up a notch by forming a drone racing team with others on campus. They expect to recruit and begin training a few dozen students in the next few weeks and teach them the basic mechanics of a drone. About 40 students have responded with interest.

“These are people like us who saw drone racing on YouTube and want to learn how to do it,” said Pool, who is chief engineer for the budding club team.

Huynh adds: “It sells itself. All I have to say is, ‘I do drone racing. Do you want to be a pilot?’”

When the pair became interested in flying drones, they connected with members of the American Institute of Aeronautics and Astronautics (AIAA) student organization on campus and the Dallas Drone Racing Club to learn more and develop safety measures. Since then, the technically savvy duo has built several small first-person-view aircraft of their own — from a 5-inch mini-class size to Tiny Whoop (less than 8 centimeters in width and length) and toothpick micro frame sizes (100 to 125 millimeters).

Eventually, they hope to fly drones that reach 90 mph. All racing will be done off campus, in conjunction with Dallas Drone Racing Club events.

For more information or to participate in the drone racing team, email Justin Pool or Andy Huynh, or join their Slack channel.

Before they can pilot a drone, new recruits must complete about 10 hours of computer simulation training using the same controllers that are used with a drone.

“That will get them in the air to fly without worrying about wrecking their drone,” Huynh said.

Though there are no prerequisites to learning how to fly a drone, good eye-hand coordination will help someone get the hang of the throttle, roll and pitch. People who play a lot of video games can pick it up easily, Pool said.

Because drone equipment can be a bit pricey — with drones costing from $250 to $500 in addition to the price of goggles and radio transmitters — they hope to find community sponsors to offset expenses. Pool and Huynh also want to show students how they can build their own drones.

Eventually, club members will use the cricket field on the south end of campus for their practice flights. Due to AIAA rules, drones can’t fly within 5 miles of an airport.

“Students in and outside of engineering will enjoy the camaraderie and will be learning some skills they didn’t have before. Designing and building your own drone helps you learn a concept and improve on it yourself.”

“It’s actually a pretty safe hobby because during a race you have nets set up. The drone can break up, which turns it into a projectile, but there are safeguards in place. If your drone loses touch with the transmitter, it turns off,” Pool said.

Terrell Bennett MS’07, PhD’16, senior lecturer in the Erik Jonsson School of Engineering and Computer Science and faculty director of UTDesign EPICS (Engineering Projects in Community Service), is one of the team’s faculty advisors. He is helping to develop working procedures. Though he enjoys flying a drone himself, Bennett said he didn’t have “the nerve or reflexes for drone racing.”

But the club will benefit any student who is interested in learning how to build and fly a drone, he said.

“Students in and outside of engineering will enjoy the camaraderie and will be learning some skills they didn’t have before. Designing and building your own drone helps you learn a concept and improve on it yourself,” Bennett said.

For now, Huynh and Pool are encouraging other students to give drone racing a try.

“It doesn’t matter what your major is. This is a skill you can learn. You just have to come out and try it,” Pool said.