A talk from a UT Dallas professor about world religions will launch the Diversity Lecture Series, which will last all of October in recognition of National Diversity Awareness Month.

“These lectures will help our students, staff and faculty to become more culturally competent and to better prepare them as leaders in our multicultural and global society,” said Dr. Magaly Spector, vice president for diversity and community engagement. “Diversity encompasses much more than race and ethnicity. This series allows us to broach a range of topics like religion, disabilities, communication and generational differences.”

At noon Friday in the Kusch Auditorium (FN 2.102), Dr. Bobby C. Alexander, associate professor of sociology, will present the first of four lectures with “We are the World: World Religions as American Religion.” Registration is free for the lectures.

Alexander holds doctorate degrees from Columbia University and Union Theological Seminary in New York. He teaches various courses on religion, immigration, race and ethnicity. He is the recipient of the Student Choice Teaching Award, EPPS faculty Outstanding Teaching Comet Award and the Distinguished Teacher in Diversity and Multicultural Education Award.

Alexander is author of many articles in academic journals, book chapters, as well as book monographs on topics including religion and social rights. He is working on articles regarding religion and church leadership during the process of assimilation for Mexican immigrant women, as well as credibility in political asylum pursuit. He is a member of With One Voice, a coalition to improve the lives of immigrants in North Texas.

“Dr. Alexander’s work within UT Dallas and the surrounding community, as well as larger communities within Texas and the United States, is of great service to the cause of diversity. His expertise in several diversity topics is of great value,” Spector added.

The other lectures in this year’s series are:

Ulatowska grew up in a pre- and post-war Europe, was imprisoned in the notorious Auschwitz concentration camp at the age of 11, and endured many years of hardship in Soviet-controlled Poland before earning her doctorate degree in linguistics from the University of Edinburgh, and moving to the United States five decades ago. She received the prestigious Copernicus Award in 2010 from the Polish Neuropsychological Society for her lifetime of work in neurolinguistics.

Ulatowska investigates language changes, particularly in aphasia, dementia and advanced age. Her work uses a strong interdisciplinary approach, taking into account interrelations of social, linguistic and cognitive factors essential to communicating. Ulatowska works with the culturally diverse processing of proverbs, narratives and language representation of experience, including African-American-specific processes of aphasia, and the stories of Holocaust survivors in Poland.

Woldu received his undergraduate degree in social science in Ethiopia, and earned his doctorate degree in economics from the Poznan University of Economics in Poland.

Woldu created a course on multiculturalism in the classroom soon after he arrived in Dallas in 1993. As director of international management programs and the director of international students exchange programs and foreign study trips, Woldu has developed a program with the Naveen Jindal School of Management that takes students abroad. While there, they can understand local culture, people and business practices, apply language and communication skills, and understand international business.

His research focuses on areas of human resources management and assessment of cultural values in various societies, with emphasis on emerging economies, cross-cultural studies and analysis of cultural dynamism. Woldu believes that his life experiences have informed his understanding of the importance of diversity for social development and change, but also for staying competitive in the global economy. 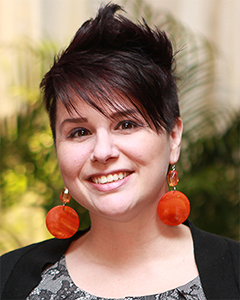 Knight received her doctorate degree in English literature from the University of California, Santa Barbara. Her teaching and research utilize a hybrid approach of theory and application of practice. Knight teaches classes in digital media theory, the shift from analog to digital textuality, viral media, wearable media, and race, class, gender and sexuality in digital environments.

Her research broadly centers on technology and social media in relation to art, identity, politics and education. She is researching how viral media empowers or oppresses subjects in a network society, in addition to gendered identity and digital media. Knight is active in university and public service and is regularly invited to give talks on women and technology, social and wearable media and digital humanities.