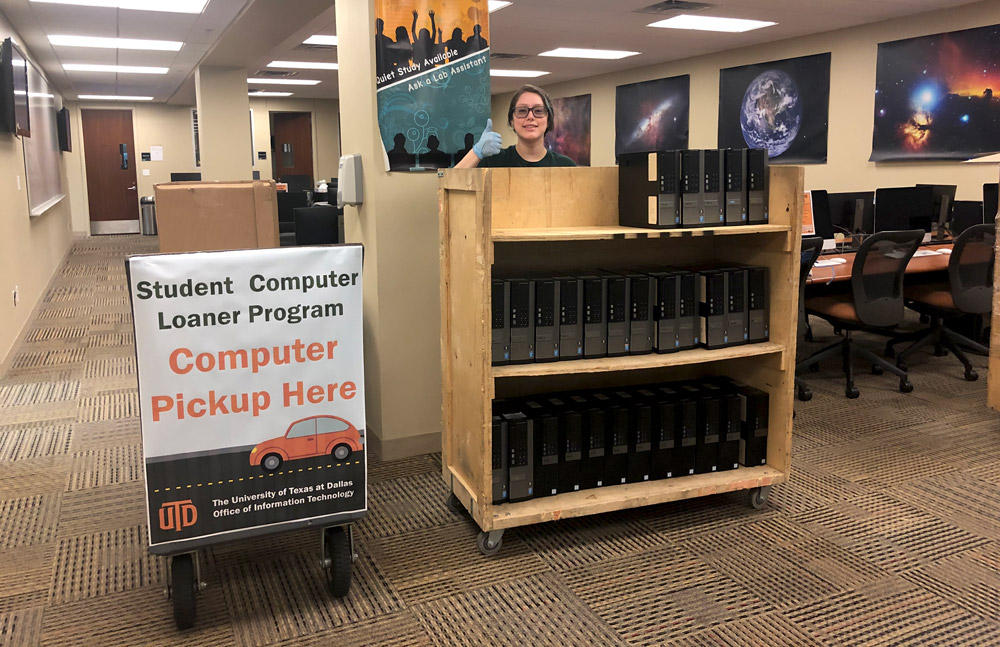 Valerie Enriquez, IT support specialist and arts and technology senior, shows off a cart of desktop computers that were taken from the Eugene McDermott Library for use in the student computer loan program.

When The University of Texas at Dallas made the difficult decision to move spring courses online, administrators throughout campus immediately thought of the UT Dallas students who might not have adequate computer access.

“When we make a big move like this, it’s going to inequitably affect students who are in higher-need categories,” said Dr. Jessica Murphy, dean of undergraduate education. “So anything the institution can do to even that playing field is important — understanding that we can’t possibly fix all of it.”

Immediately, dozens of University staff and faculty jumped into action, developing a strategy with the primary task of finding computers. 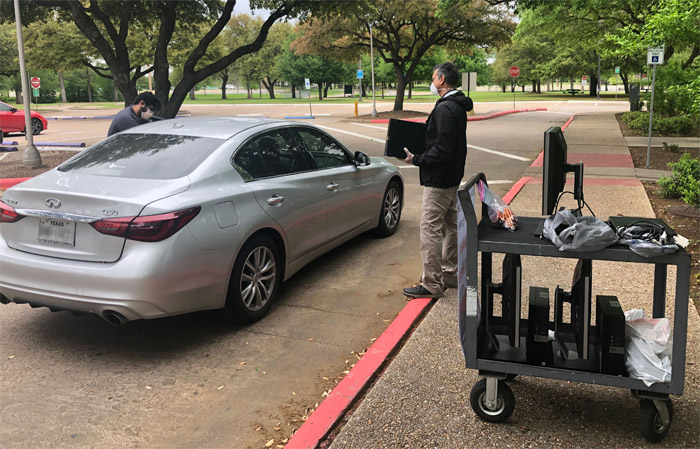 Shawn Joseph (left), IT support specialist, and Jaby Abraham, manager of information technology, carry a loaner computer to a student’s car. The program has lent about 70 computers to students, with about 50 requests still pending.

Melinda Colby, senior director in the Office of Information Technology (OIT), said the University considered a number of options, including renting computers; however, the cost and shipping time ruled that out. OIT staff members next connected with every school and department to help find computers.

At the same time, Murphy and Dr. Amanda Smith, associate vice president for student affairs and dean of students, began the work of identifying students who needed computers for online classes.

“Amanda developed a great way of doing outreach with the students, and I worked on getting names of students that faculty had already identified,” Murphy said.

Murphy, who is also professor of literary studies and the Mary McDermott Cook Chair for Undergraduate Education, said some students may not own computers, while others might share computers with family members — which would put the device in high demand during the work-from-home period.

OIT staffers worked long hours and on weekends to prepare the desktop and laptop computers to be lent to students. The devices had their hard drives wiped and reimaged, and the units were sanitized. In addition, keyboards, mice and monitors were obtained and sanitized.

Staff with the Office of Student Affairs and OIT said those who received the computers were very grateful, expressing particular appreciation that the University did not take for granted that everyone had the technology needed for online learning.

“I don’t know of another university that collaborates so well and focuses on students as much. There’s just something kind of special about UTD.”

Approximately 70 computers have been lent to students, with about 50 requests still pending. Colby said computers continue to be prepped for additional loans.

She said the program has been very rewarding for those who participated.

“When staff and faculty found out what the equipment was going to be used for, people were quick to say, ‘Yes, we’ve got this,’” Colby said.

Murphy said the project is a good example of how UT Dallas cares about its students.

“I don’t know of another university that collaborates so well and focuses on students as much,” she said. “There’s just something kind of special about UTD.”