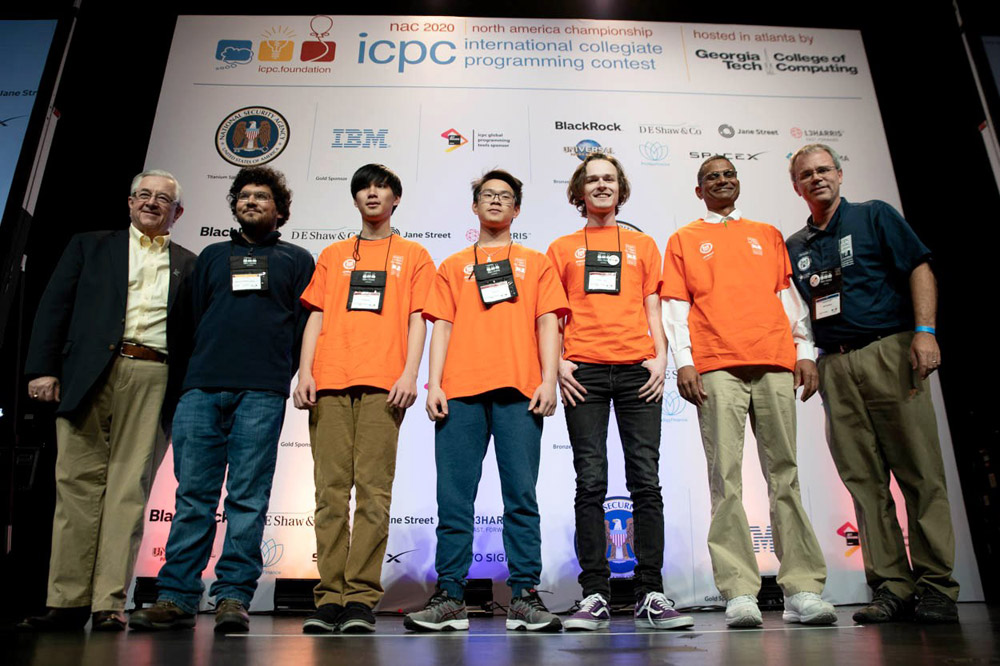 Darrin Wiley BS’19, An Q. Nguyen and Duy Vu advanced from regional to national competitive contests over the past year to overcome one of their toughest challenges: qualifying for the International Collegiate Programming Contest (ICPC) World Finals.

The University of Texas at Dallas computer science students will compete at the finals in June 2021 alongside 140 teams from 111 countries. Eighteen other U.S. universities are fielding teams, including the Massachusetts Institute of Technology, Georgia Tech and UT Austin. The Erik Jonsson School of Engineering and Computer Science team is the first from UT Dallas to qualify for the finals since 2007.

The students advanced after finishing 15th out of 65 teams in the ICPC North America Championship (NAC) in February. Last November, they placed second at the ICPC South Central USA Regional Contest and qualified for NAC. The team was set to compete in the world finals last month at the Moscow Institute of Physics and Technology, but the event was postponed due to COVID-19.

For Wiley, who has been programming competitively since high school, qualifying for the world finals was “amazing.” This year was his last chance to make it to the international competition, since he plans to graduate with a master’s degree in computer science in August.

“This team and other teams that represent UT Dallas in annual ICPC programming contests have worked hard for several years solving very hard problems and attending hours of training to earn this honor. They are extremely dedicated and are among the best in the nation. The faculty and staff are extremely proud of them.”

Bhadrachalam Chitturi PhD’07, associate professor of instruction in the Department of Computer Science

“I’ve been competing for UTD for the last five years with the goal of going to worlds, and for the last three, we narrowly missed qualifying. We solved the same number of problems as the teams that advanced, just a little too slowly,” Wiley said. “Making worlds after five years of hard work, on my last year of eligibility, is a great feeling.”

Wiley said he does not mind waiting a year to compete. The students continue to practice and work with coaches online due to the COVID-19 pandemic. “It just means we have more time to practice,” he said. “I think until then, we’ll just continue to study and get better.”

In ICPC, teams consisting of three students each tackle a set of novel challenging problems over five hours. They must design and implement algorithms that solve the problems under strict time and space constraints. Success requires expertise in problem-solving, advanced algorithms and data structures, mathematics, abstract thinking, programming languages and teamwork. For example, one of the problems at NAC required teams to determine the number of Battleship game configurations with five or fewer ships on a board with five rows across and five rows down.

“Think about solving for the length of one side of a triangle when you are given two sides,” Wiley said. “We aren’t trying to find the answer, exactly; rather we want to create an equation that will give us the right answer regardless of the given measurements. That’s what we do in the competitions, but with code.” 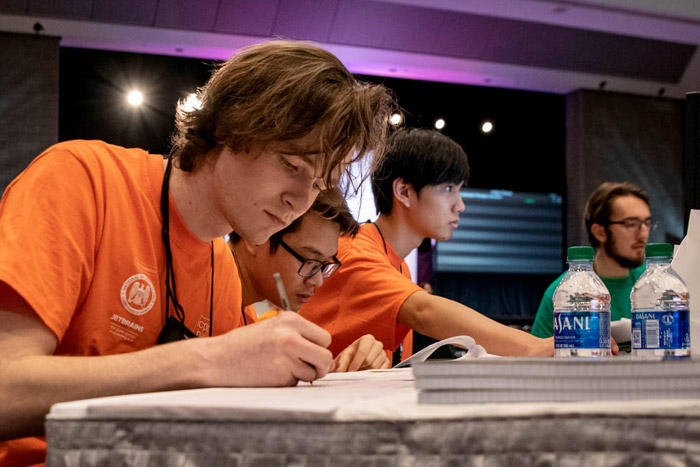 “Making worlds after five years of hard work, on my last year of eligibility, is a great feeling,” said Darrin Wiley BS’19 (left), who will earn his master’s degree in August. He will compete in next year's world finals along with teammates Duy Vu (second from left) and An Q. Nguyen.

Wiley credited the team’s success to a lot of practice and coaches: Bhadrachalam Chitturi PhD’07, the team’s coach and associate professor of instruction in the Department of Computer Science, and Mohammadreza (Reza) Haghpanah, computer science doctoral student and the team’s assistant coach, who previously competed in the world finals.

“This team and other teams that represent UT Dallas in annual ICPC programming contests have worked hard for several years solving very hard problems and attending hours of training to earn this honor,” Chitturi said. “They are extremely dedicated and are among the best in the nation. The faculty and staff are extremely proud of them.”

The teammates met through Codeburners, a UT Dallas club that prepares students for programming competitions. Nguyen is a senior, and Vu is a sophomore.

“My [high school] computer science teacher put me on a team, and I did really bad, but I had a lot of fun, so I kept competing, and eventually we got a lot better. It became my passion in high school, and I ended up coming to UTD because of its competitive programming,” Wiley said.

Dr. Ivor Page, who launched Codeburners and the competitive programming teams and runs the computer science honors program at UT Dallas, praised the trio for their dedication and hard work. Over the years, Codeburners was well supported by the expertise of Dr. Balaji Raghavachari, professor emeritus of computer science.

“We have a world-class team, and I am so proud of them,” Page said. “I’m very proud to have been part of this wonderful enterprise, but the real accolades go to the coaches and these truly world-class students.”