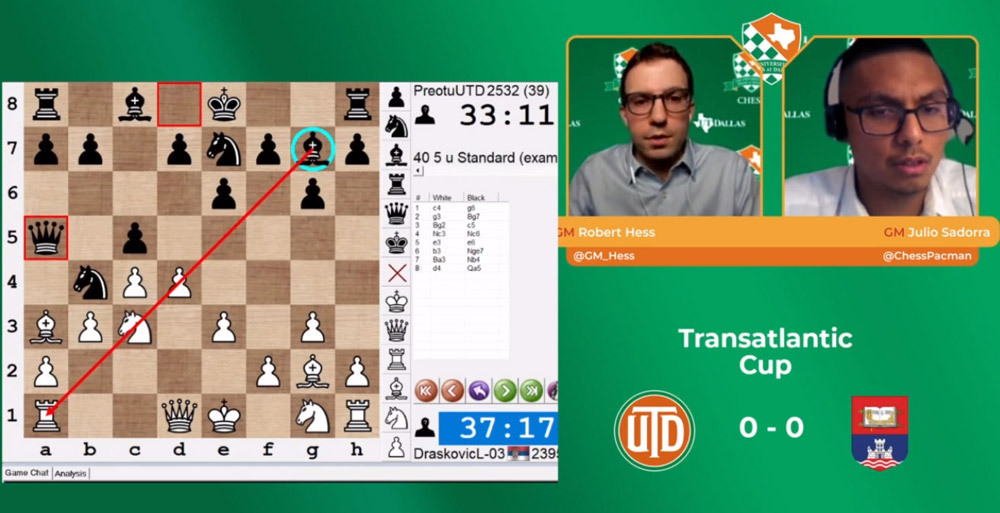 After winning its recent, annual match with the University of Belgrade, The University of Texas at Dallas chess team is preparing for the important Pan-American Intercollegiate Team Chess Championship in January. The top four teams at the Pan-Am tournament qualify for the 2021 Final Four tournament.

“We did a lot of preparation for the Belgrade matches, and it paid off,” said chess team coach Julio Catalino Sadorra BS’13. “But there are always ways to improve our performance.”

The annual match with Belgrade is held online — which Sadorra said worked well during the COVID-19 pandemic. The 2020 tournament, however, featured a new twist: live online commentary provided on Twitch by Sadorra and Grandmaster Robert Hess. Twitch is a livestreaming platform for gaming, esports competitions and other sports activities.

“It was a great opportunity because we got to introduce all of our players and demonstrate how deep our team is. I hope we can keep doing it.”

Sadorra said he hopes online commentary continues to be part of the UT Dallas matches.

“It was a great opportunity because we got to introduce all of our players and demonstrate how deep our team is. I hope we can keep doing it,” he said.

While the Gligoric Cup tournament has always been held online, most collegiate chess tournaments have typically been held face to face. The COVID-19 pandemic caused the cancellation in April of the 2020 President’s Cup, considered the “Final Four of College Chess,” in New York City. The UT Dallas chess team had qualified for the 2020 tournament for the 17th time in 20 years.

The 2021 Pan-Am tournament will be held Jan. 4-6, but it will be moved online. In addition, the tournament’s rules are changing to create faster games and more competition. Each team will play nine rounds with matches that will last about an hour. Previously, each team played six rounds with games that lasted nearly twice as long.

Sadorra said he is working with the players to prepare for the strong field at the Pan-Am tournament.

“You have to train for endurance so that the players are confident and are ready to play the strongest players,” he said. “You never know what can happen with this type of event. There are so many strong teams that you have to watch for an upset.”

Stallings said collegiate chess matches that are held online present new challenges, particularly in regard to cheating. To prevent players from accessing chess computer programs during their matches, players at the Pan-Am tournament will have to be visible to the tournament director on two cameras; they cannot take any breaks; and games must be verified through computer algorithms before winners are finalized.

“They review all of the games. If a player cheats using a computer program, the algorithm can see if the moves the players made were better than even a grandmaster would typically make,” Stallings said.

Another potential problem with online competitions is losing connectivity during a match or making a mouse slip that causes a wrong move.

“One of the best players in the world recently made a slip and lost his match,” Stallings said.

Commentary for the Pan-Am tournament will be provided on Twitch by the Mechanics’ Institute. 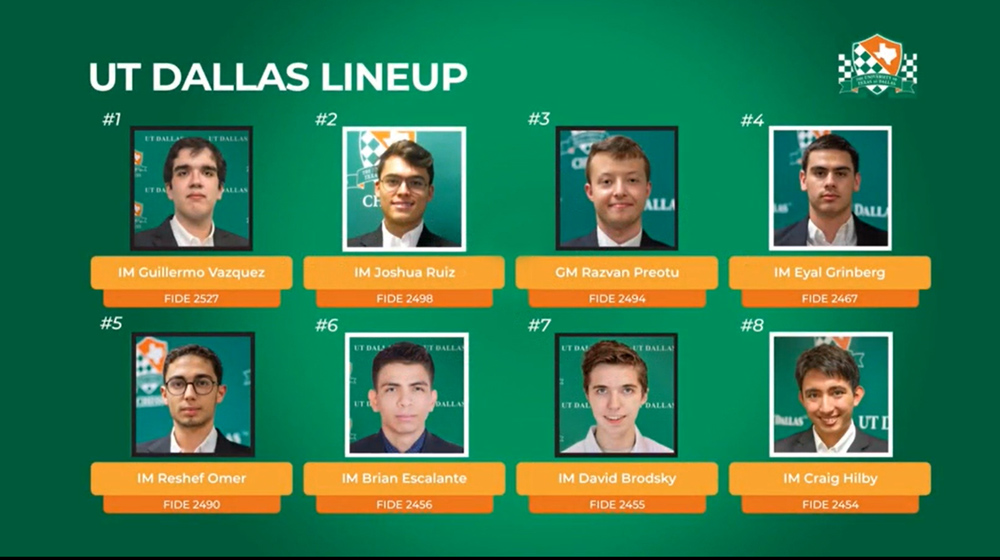 The UT Dallas chess team will try to qualify for the President’s Cup for the 18th time in the past 21 years when it competes in next month’s Pan-American Intercollegiate Team Chess Championship.