The University of Texas at Dallas was named one of the nation’s best colleges for LGBTQ+ students and the only university in Texas and the Southwest to make the top 25 list.

The University was ranked 14th in the nation by BestColleges in partnership with Campus Pride. UT Dallas has a 5-star rating, the highest possible, from Campus Pride for its commitment to LGBTQ-inclusive policies, programs and practices. 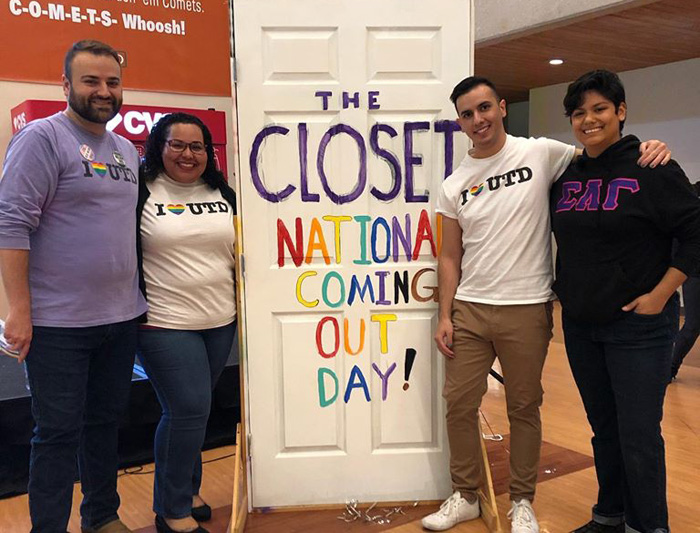 “We are so proud of The University of Texas at Dallas for being recognized as No. 14 in the nation for LGBTQ-inclusion,” said Matt Winser-Johns, assistant director for LGBT+ programs at the UT Dallas Galerstein Gender Center. “It truly takes our whole community, and we are so appreciative of the continuous efforts of our entire campus to make sure all LGBTQ+ students feel affirmed.”

The University extended its nondiscrimination protections in 2014 to include sexual orientation, gender identity and gender expression where not protected by applicable law. The Gender Center, part of the Office of Diversity and Community Engagement, advocates for and supports the LGBTQ community through a variety of programs, services and events, including the Queer and Trans Action Group (QTAG) and campus events, such as Lavender Graduation and National Coming Out Day. Founding director Lauren DeCillis advocated for the center — which opened in 1996 to serve women on campus — to extend support to the LGBTQ community as well over the past 15 years.

“Our campus administrators recognized the need to support the LGBTQ+ community at UTD as the campus flourished and diversified,” DeCillis said. “The climate for the LGBTQ+ community was supportive before we initiated formalized training programs, resources, support groups and lectures. I am proud that the Galerstein Gender Center gives students, staff and faculty a welcoming space where they can explore their sexual, gender, racial and academic identity.”

“It truly takes our whole community, and we are so appreciative of the continuous efforts of our entire campus to make sure all LGBTQ+ students feel affirmed.”

In addition to the Gender Center, UT Dallas offers services to the LGBTQ community through the Student Counseling Center, a Campus Pride Alternative Spring Break project and gender-inclusive housing. The University also supports employees through QuTD and provides alumni the opportunity to stay involved through the UTD Alumni of Gender, Sexual Orientation, and Romantic Minorities.

Cody Kuhn BA’17, MA’18 said the supportive organizations on campus became a “second family” to him when he arrived at the University. He became involved in numerous student activities, from theatre to The Rainbow Guard, from Pride at UTD to LEAP.

CometCast: “Could We Ever Achieve Gender Equity?”

CometCast: The Challenges LGBTQ+ Students Face During the COVID-19 Pandemic

“One of the things UTD does best is invest in diversity,” said Kuhn, now a doctoral student at UT Austin. “Sometimes it can be really hard to be heard. The Galerstein Gender Center and student organizations really work together to make policy and help implement that together. Being able to effect change in my community felt really empowering.”

As a student, Kuhn also had the opportunity to participate in studies conducted by UT Dallas faculty, an opportunity that expanded his impact as a member of the transgender community.

“I was able to work with faculty who were doing a survey of LGBTQ Texans and their needs,” Kuhn said. “Faculty at UTD are really involved in getting students involved in research. I was able to get my name on something that was published, and it made me feel like I could make actual change by studying government and LGBTQ Texans.” 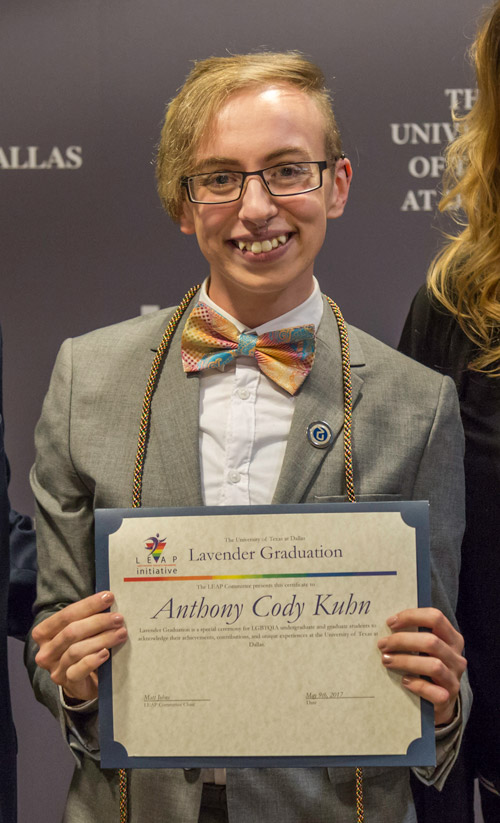 “One of the things UTD does best is invest in diversity. Sometimes it can be really hard to be heard. The Galerstein Gender Center and student organizations really work together to make policy and help implement that together. Being able to effect change in my community felt really empowering.”

Students like Kuhn have played a major role in advocating for and serving the LGBTQ community on campus, Winser-Johns said.

“The Galerstein Gender Center has always advocated for our campus community, but we wouldn’t exist without the tenacity and advocacy of our students,” Winser-Johns said. “Over the past couple of years, our LGBTQ+ students have created several new LGBTQ-focused student organizations, each one concentrated on different needs. Their different focuses include the first LGBTQ-Greek organization, the Queer and Trans People of Color organization, a social group, a queer and trans students of color-focused online magazine, a faith-based affirming group and a group for students that are out in the STEM [science, technology, engineering and mathematics] fields. We can’t wait to see what they accomplish next.”