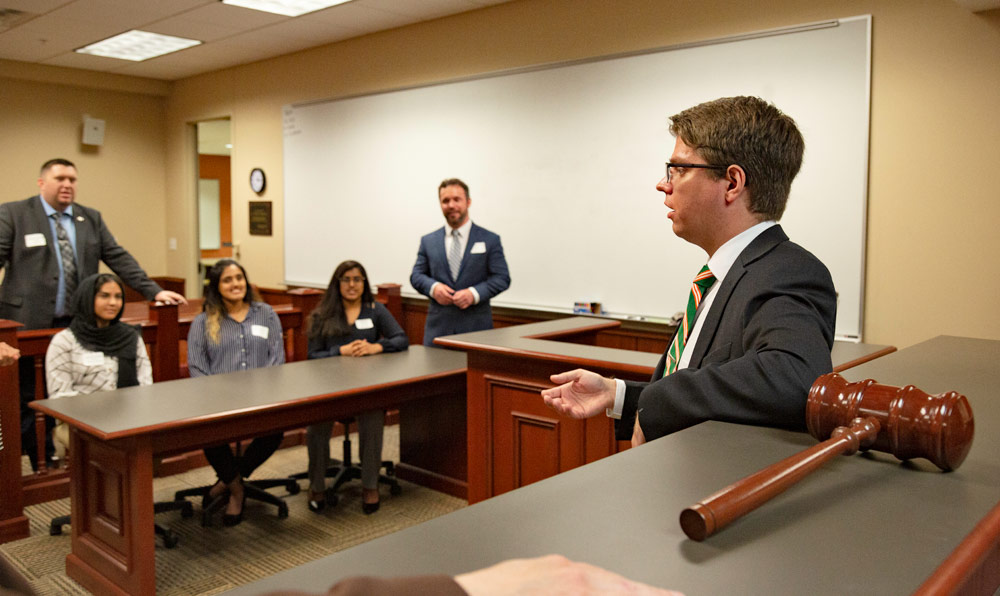 Benjamin Dower BS’09 (right), an assistant attorney general for the state of Texas, talks about his experiences with attendees at the UT Dallas Law Conference. The new conference was designed to bring more alumni back to campus and mentor students who are part of a strong pre-law program at the University.

Benjamin Dower BS’09 decided during his junior year at The University of Texas at Dallas that he wanted to go to law school.

Now, 10 years after he graduated, Dower works as an assistant attorney general for the state of Texas. The former Student Government president and student regent for The University of Texas System Board of Regents is one of a growing number — now topping 850 — of UT Dallas alumni who have become lawyers.

“The thing that stands out now is not the austerity of the campus but rather the quality of the instruction I received from my professors. I had some of the best teachers I’ve had at any point in my education including law school.”

Dower and several others returned to campus last month to engage with pre-law students at the first UT Dallas Law Conference. The alumni talked about what to expect at law school, life as a lawyer, finding a mentor and the path to becoming a partner at a law firm.

“Many students begin law school with only a vague understanding of the legal profession,” said Dower, who graduated from The University of Texas at Austin School of Law. “Hopefully, the UT Dallas Law Conference gave its attendees a clearer vision of what to expect, not only from law school, but from the practice of law itself.”

The conference, hosted by the Pre-Law Advising Center and the School of Economic, Political and Policy Sciences, was a step toward bringing more alumni back to campus to mentor pre-law students.

“Welcome to your first network,” said Barbara Kirby BA’80, PhD’15, director of the Pre-Law Advising Center. “We want you to have a network that isn’t connected to where you went to law school; it’s connected to your being a Comet here. Whatever profession you end up in, you’ll always be a Comet.”

The conference featured keynote speaker Bill Holston BA’78, executive director of the Human Rights Initiative of North Texas. He spoke about his work on behalf of political and religious asylum applicants and his time at UT Dallas in the late 1970s when the campus had fewer buildings and little landscaping.

The Pre-Law Advising Center offers guidance for pre-law students from their first year at UT Dallas, through the law school application process and on to the eventual matriculation to law school. It also offers various workshops as well as speakers from throughout the legal practice spectrum, an Innocence Project seminar and three nationally recognized advocacy programs. Services are available to all current students and alumni, and those students involved in the Comet Connection program.

“The thing that stands out now is not the austerity of the campus but rather the quality of the instruction I received from my professors,” Holston said. “I had some of the best teachers I’ve had at any point in my education including law school.”

The Pre-Law Advising Center offers a variety of services and programs to help students prepare for law school and legal careers. At least 91 percent of students who work with the office are accepted into law school, and many alumni have attended top schools, including Harvard and Yale.

Kirby, who spent most of her career as a corporate attorney, meets with students to help them prepare for applying to law school, including discussing their personal statements.

“I do a lot of listening,” Kirby said. “A question every one of them is going to have to answer is, ‘Why law school?’”

Pre-law students said the conference helped them get a better understanding of what it will be like to practice law. Yarely Zepeda, a criminology junior who attended the event, said she plans to focus on juvenile justice. Zepeda said she came to UT Dallas because her sister had attended, and she liked the campus. She said it also has been a great place to prepare for law school.

“The professors are great, and they are really encouraging,” Zepeda said.