Accolades is an occasional News Center feature that highlights recent accomplishments of The University of Texas at Dallas faculty and students. To submit items for consideration, contact your school’s communication manager. 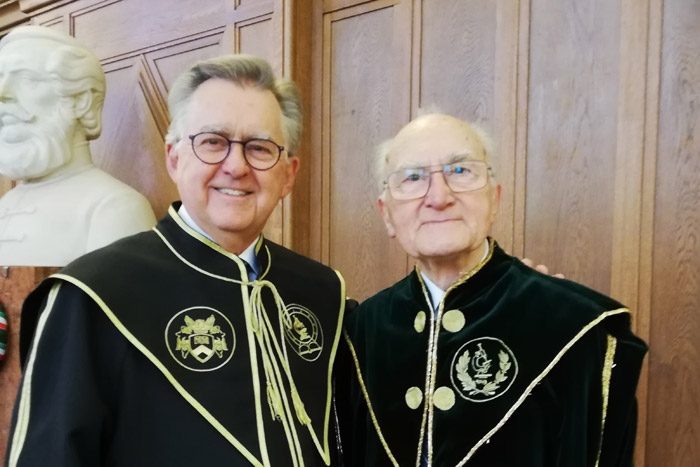 Sherry, a professor of chemistry and the interim dean of the School of Natural Sciences and Mathematics, was recognized by the faculty senate for his more than four decades of continuous collaboration with chemists at the University of Debrecen. His citation also notes Sherry’s “outstanding contribution to the chemistry of lanthanide complexes used in magnetic resonance imaging for medical diagnosis.”

Sherry, who joined the UT Dallas faculty in 1972, is a pioneer in developing novel imaging agents used in MRI. His longtime collaboration with the University of Debrecen began with a 1986 visit to UT Dallas by Dr. Ernó Brücher, who spent two years on campus conducting research with Sherry in the Department of Chemistry. Since then, five other young scientists from the University of Debrecen have come to work with Sherry on medical imaging agents. Four of those researchers are now on the chemistry faculty in Debrecen, while one is a faculty member at UT Southwestern Medical Center. Those collaborations resulted in 50 scientific publications, Sherry said.

“I have deep respect for the scientists who traveled from Debrecen to work with me,” Sherry said. “They have had a profound impact on many of my students and postdoctoral researchers at UT Dallas. I was honored to travel to Hungary to receive this recognition.” 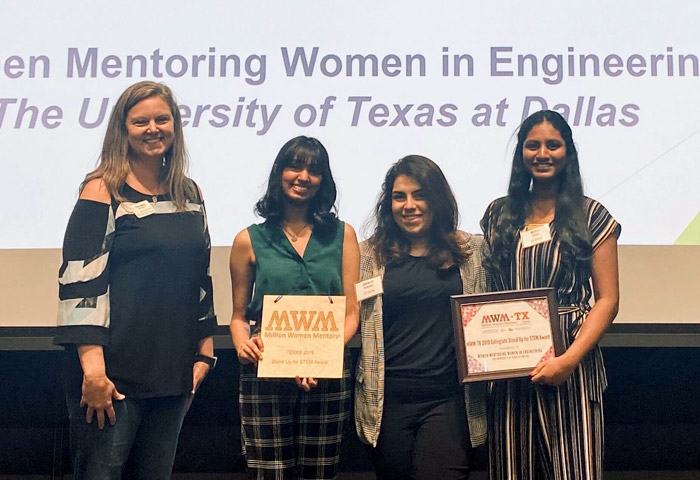 The award recognizes students or student organizations that demonstrate leadership and passion for STEM-related careers and encourage and support others to develop STEM skills through role modeling and mentoring. Women Mentoring Women matches Erik Jonsson School of Engineering and Computer Science students with women in the workforce for a semester-long mentoring engagement that includes regular meetings to discuss issues such as resume tips, networking and interviewing. The group also helps students prepare for interviews and research opportunities.

“I was nervous before my first interview, but after talking with my group, I realized that I had to get past my nervousness and walk in with confidence to acquire a summer internship,” said computer engineering senior Gelareh Nobakht, president of the organization. “This meeting motivated me, and I went in more equipped and readier with tips from the mentors and mentees who had been there before.”

Women Mentoring Women received the award at the Dec. 6 Stand Up for STEM Awards ceremony during the Texas Women and Girls in STEM Summit in Austin. The group is accepting members. Email [email protected] for more information.