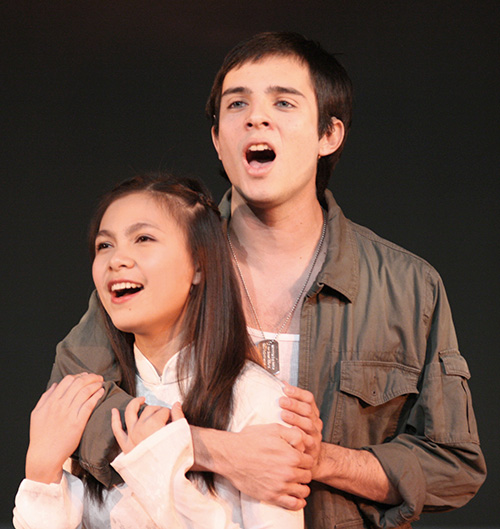 In honor of Veterans Day, UT Dallas’ School of Arts and Humanities is presenting “Best of Broadway VI: War and Revolution,” recognizing the contributions of servicemen and servicewomen, both past and present.

The choral event will feature selections from The Civil War, Little Women, South Pacific and Miss Saigon, among others.

The performances will be at 8 p.m. Thursday, Friday and Saturday in the University Theatre. Shows are free and open to the public.

“Every year, musical numbers from six Broadway musicals are chosen for this event, including large ensemble numbers with chorus. Featuring the students from Chamber Singers and Vocal Instruction II courses, the shows are chosen with a central theme in mind. This year’s theme takes us through the American Civil War, World War II, Vietnam and the era of the Cold War,” said director Kathryn Evans, who is also an arts and humanities senior lecturer.

The program includes scenes from the musical Les Miserables, which is based on the novel by Victor Hugo. Students will also perform selections from Chess, which follows dueling chess players during the Cold War – a time when chess championships were used for political purposes. The characters are loosely based on American Bobby Fischer and Russian Grandmasters Viktor Korchnoi and Anatoly Karpov.

“It is natural that many musicals address the issues of war and revolution, since the inherent conflict leads to interesting situations. The Civil War set will include original photography from the era. Coupled with the wonderful music, this makes for a very compelling show," Evans said.

For information about "Best of Broadway VI" and other productions, visit the School of Arts and Humanities events website.