As an undergraduate studying biochemistry at The University of Texas at Dallas, Dr. Anju Sreelatha was nothing, if not organized. 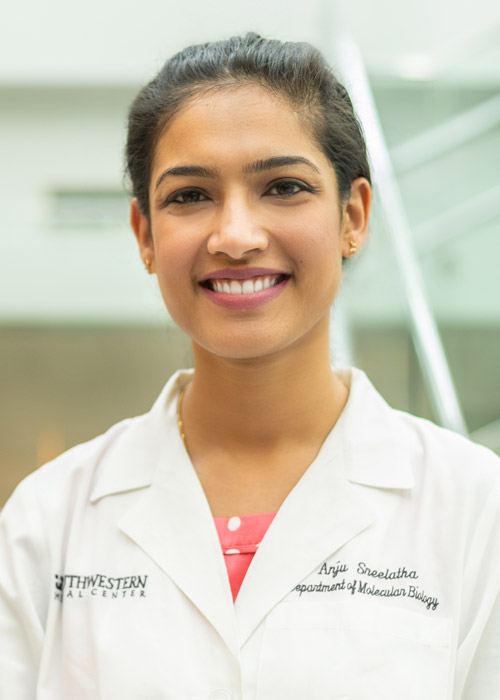 “When she was my student, before smartphones were widely available, Anju used to walk around with a large calendar on a white board. The schedule was for May, and it was only October. That’s how exquisitely organized she was,” said Dr. Warren Goux, UT Dallas associate professor of chemistry and one of Sreelatha’s undergraduate mentors.

Those organizational skills and drive helped propel Sreelatha to success beyond her UT Dallas bachelor’s degree in 2009. She went on to earn a doctorate in biochemistry from UT Southwestern Graduate School of Biomedical Sciences in 2014.

Now, Sreelatha has won the 2019 Brown-Goldstein Award for Excellence in Postdoctoral Research, the highest recognition given to a fellow in the UT Southwestern Graduate School of Biomedical Sciences’ Postdoctoral Scholars Training Program. The award recognizes qualities of a successful researcher — creativity, productivity and presentation skills — as well as originality, depth and impact of the honoree’s research project.

Sreelatha was chosen by a committee of graduate school faculty members and received a monetary prize as well as the opportunity to give a universitywide lecture.

When she was a UT Dallas senior, Sreelatha participated in the University’s Green Fellowship program. Green Fellows are undergraduates who spend an entire semester immersed in basic or medical research at UT Southwestern and pursue individual research projects.

As an undergraduate and a member of UT Dallas’ Chemistry Student Association and other clubs, Sreelatha also conducted research that led to her becoming a co-author on a journal article. She credits Goux for fueling her enthusiasm for research during her time at the University.

“Drafting an article as an undergraduate automatically sets you apart as a standout,” Goux said.

The Brown-Goldstein Award for Excellence in Postdoctoral Research is named for Dr. Michael Brown and Dr. Joseph Goldstein, two longtime UT Southwestern researchers who received the 1985 Nobel Prize in physiology or medicine for their discovery of the low-density lipoprotein receptor and the underlying mechanisms of cholesterol metabolism. Their work laid the scientific foundation for the development of cholesterol-lowering statin drugs. Goldstein is chairman of molecular genetics at UT Southwestern, and Brown directs the Erik Jonsson Center for Research in Molecular Genetics and Human Disease.

The award was created by an anonymous donor to honor Brown and Goldstein’s contributions to training the next generation of scientists.

As a postdoctoral researcher at UT Southwestern, Sreelatha and her mentor, Dr. Vincent Tagliabracci, assistant professor of molecular biology and the Michael L. Rosenberg Scholar in Medical Research, discovered two novel kinase families. Kinases are enzymes that transfer phosphates from one molecule to another, a process called phosphorylation. Sreelatha uncovered an atypical kinase family that revealed an unexpected role for protein phosphorylation in spore biology, with important implications in infectious diseases such as anthrax. Her recent work has significant ramifications not only in the protein kinase research field, but also in disease states, such as cancer and neurodegeneration where oxidative stress is an important factor, as well as aging.

Sreelatha said her research achievements come from strong mentorship and spending long hours in the lab.

“As we worked on a group of kinases, we were hitting dead ends at every step of the way,” she said. “Then something significant happened, and we thought, ‘Oh! This makes sense now!’ There was a high-five in the lab, but a very cautious high-five.”

Soft-spoken and thoughtful, Sreelatha doesn’t seem like a rebel. Yet, a decade ago, she bucked the trend in her household and decided not to follow the family tradition of becoming an engineer.

“My family was supportive, but I was expected to pursue a career in engineering,” she said. “Or at least something where I could get a job right out of college. They were caught off guard initially.”

She said her family adapted well to her decision and has been key to her success.

“I was blessed to have a very supportive system of family, mentors and strong female role models,” she said.

Sreelatha said she is considering academic research as a career path.

Her UT Dallas mentor can see her pursuing that, and more.

“I can see her being on the U.S. President’s Council of Advisors on Science and Technology, or on the national stage,” Goux said. “She’s pretty incredible.”